Computer science from the arithmometer to the smartphone

Admission to the exhibition is free of charge.

Hello World! is an interactive itinerary divided into six sections that illustrate the evolution of computing tools, from mechanical machines to Apple computers, including a time span from the second half of the 19th century to the 2000s, passing through iconic objects such as the Olivetti Programma 101 and the Apple II.

Central is the story of Pisa’s role in Italy’s computing adventure, told with this exhibition as part of the Informatica 50 celebrations, 50 years after the establishment of the first Italian curriculum in Computer Science. Indeed, Pisa is also the city where, in the late 1950s, the first Italian scientific calculator, the Calcolatrice Elettronica Pisana (CEP), was born in synergy with the Olivetti Electronic Research Laboratory. It was a combined effort made by scientists, politicians and industrialists who were aware that education and research in the field of information technology could provide a key to social, economic and cultural change for the entire country.

The vault space of the former Benedictine Monastery has been reinvented into sections where colors and sounds will immerse the visitor in the era of the machines shown, drawn even by the noises they made when they were in operation. The immersive experience is further amplified by the presence of interactions with some computational tools. Using a smartphone, it will be possible to access augmented reality content: archival audio/video material and original animations. Content that, collected in a special channel, will also be usable later, outside the visiting experience. 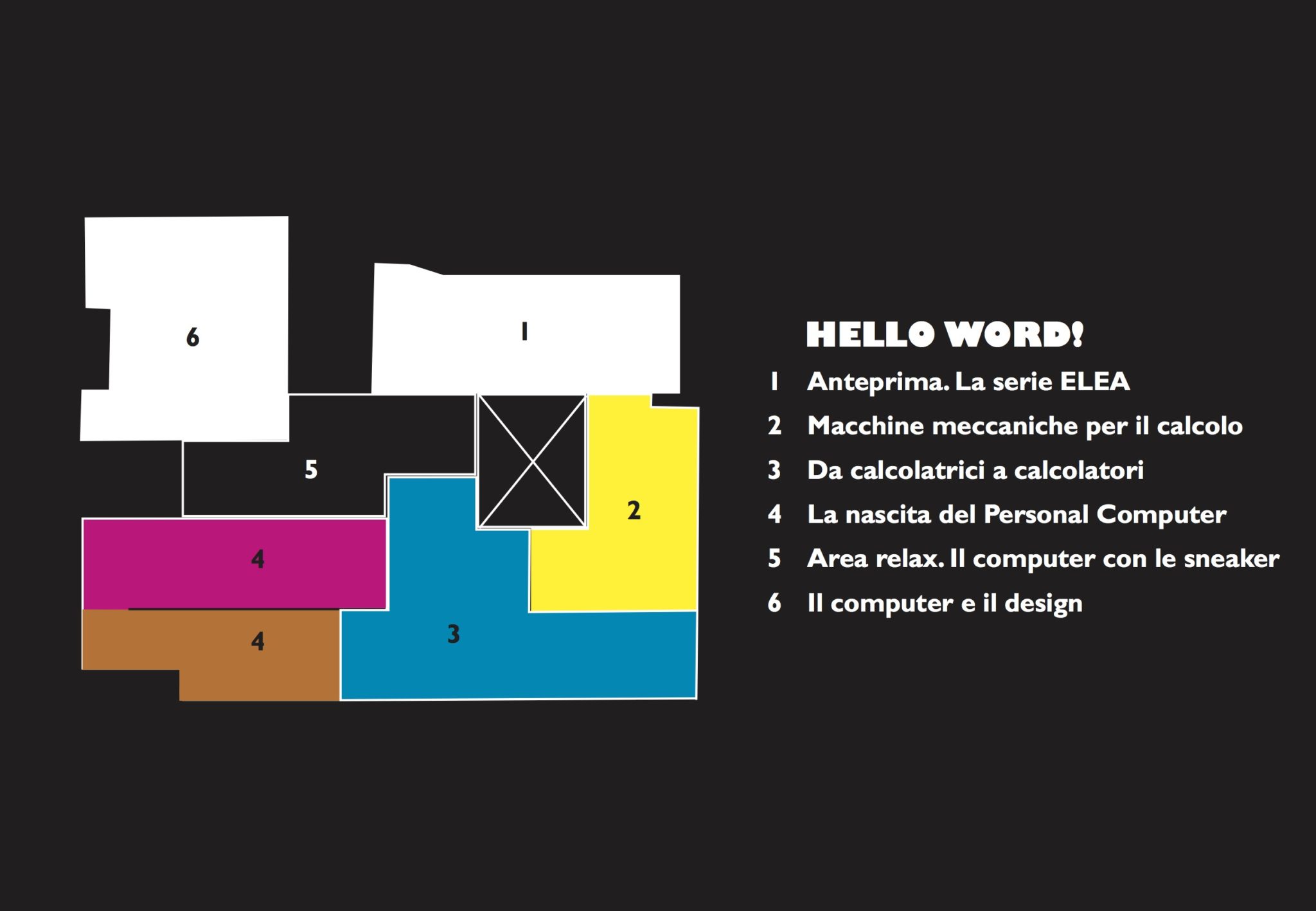 The ELEA series (ELaboratore Elettronico Aritmetico, later changed to Automatico) embodies Adriano Olivetti‘s most visionary soul: from the Macchina Zero (1957) to the 6001 (1963), featured in this section, via the 9003 (1960), one of the first commercial transistor computers ever built, in which technology and design are fused thanks to the contribution of Ettore Sottsass.

The automation of arithmetic originated with Blaise Pascal and his Pascaline (1642) and Gottfried Wilhelm Leibnitz’s Scaled Cylinder (1672). It was not until the 19th century, starting with Thomas de Colmar’s arithmometer (1851), that advances in mechanics would make these “little machines” reliable and accessible to build on a large scale, accompanying researchers and technicians until the 1970s.

The birth of the CEP (Calcolatrice Elettronica Pisana, 1961) takes us back to the 1950s and 1960s, in the era of the economic boom, which also saw Italy at the forefront of research. A project desired by the scientific community and the University of Pisa, with the patronage of the institutions of Livorno, Lucca and Pisa and the support of Adriano Olivetti, bringing the city into the world of electronic calculators.

Section 3. The Birth of the Personal Computer.

Mainframes were of a size, consumption and cost that only large institutions could support. From the mid-1960s, on the other hand, thanks first to transistors and then to integrated circuits, desktop computers were born, with Olivetti’s Programma 101 (1965). It was not until the 1980s that PCs invaded our homes: at first mainly for gaming, as with the Commodore C64 (1982).

Section 4. The computer and design

Olivetti is the first company in the world to understand the importance of the aesthetics of technological artifacts, entrusting its products to designers such as Marcello Nizzoli, Mario Bellini, and Ettore Sottsass. In the 1980s, Apple picked up its legacy. Its calculators will be designed trying to make them aesthetically pleasing, thus turning them into iconic objects.

Relaxation area. The computer with sneakers

With the new millennium, the PC leaves companies and laboratories and enters everyday life as a means of entertainment and expression. New markets are born (video games and apps), while others, such as music and film, are transformed. Thanks to the work of pioneers, such as that on Pietro Grossi‘s TAU2 sound synthesis system (1975), and the spread of editing software, everyone can be creative.